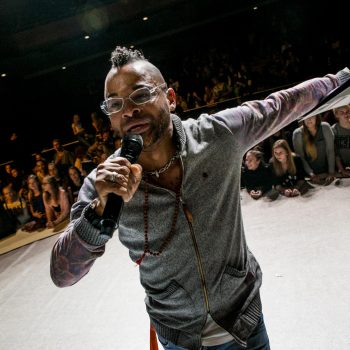 Shaik, (pronounced Shake) has several entertainment ventures in development, ranging from national dance tours to film and theatrical productions. With an extensive list of dance, choreographic and production credits, he’s a much sought after commodity!

Christopher hails from Queens, NY. The seeds of dance began at the early age of three. By nine, he became a serious student of dance, while bringing down the house in school and local stage productions! At the age of thirteen the future dance icon joined forces as the youngest member with a popular group of street dancers, The Dynamic Breakers (formerly Rockers) and performed throughout New York City’s five boroughs. This opportunity proved to be just the thing to further hone his skills, both as a dancer and as an entertainer. After conquering NY, the world became his stage!

In a few short years, as he matured even more as a dancer, Shaik’s skills earned him additional praise as an equally superb choreographer setting him apart as he embarked on his solo career. He toured both as a featured dancer and choreographer throughout the United States, and abroad in such places as Rio De Janeiro, Brazil; Tokyo, Japan; London, England; Sweden, Germany, and other countries in the continents of Europe and Asia. Some of these engagements were with renowned recording artists Run-DMC, Guy, SWV, Bobby Brown, Al B. Sure!, Heavy D. and The Boys, Monet (pronounced mo-nay), just to name a few. In addition, Shaik has either choreographed , danced and/or made special appearances in music videos ranging from Columbia Records recording artist Johnny Kemp’s, huge party anthem, “Just Got Paid” to Arista recording artist Taylor Dayne’s hit song “Tell It To My Heart”. He’s performed with various recording artists on television programs such as Showtime at the Apollo, Soul Train, The Arsenio Hall Show, and BET’s (Black Entertainment Television) Video LP.

An energetic and spontaneous personality, with a disarmingly smooth approach to dance, Shaik’s creative stylizing redefines the parameters of art in motion! As a true veteran of the stage who knows how to consume an audience’s curiosity, and capture their full attention, he’ll continue to challenge traditional ideas and methods, while creating an unimaginable thrill ride of perfection!