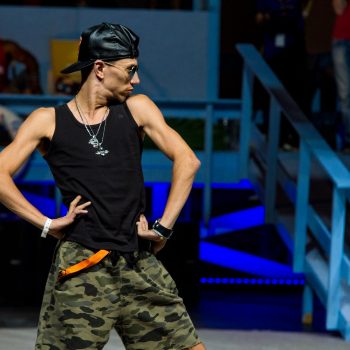 Javier Madrid also known as ‘Javier Ninja’ is a name known worldwide. With the different styles of dance Javier has learned and integrated, he has managed to develop a unique style of his own.

Javier has the ability to contort his body in ways unimaginable and leaves the audience in awe, craving to see more. Although it may appear that his unique style of dancing is an easy task to accomplish, I can assure you, that is untrue.

Javier has performed solos and collaborated with The House of Ninja all around the world, most notable was for the original House of Ninja Production, East is Red and appeared as a guest starred on America’s Next Top Model. He was the “VOGUE Champion of the Year” for three consecutive years for the House Dance International competition. Additionally, Javier has expanded his horizons nationally and internationally including a performance at the 2010 world competition Juste DeBout in Paris and televise live performance at the 2012 Super Bowl halftime with the “Queen of Pop,” Madonna.

Javier’s latest accomplishments include a performance in the music video All Night by award winning Icona Pop, and America’s Got Talent in 2013. In 2015 he and Dashaun also played a part in the Hollywood movie Magic Mike XXL.