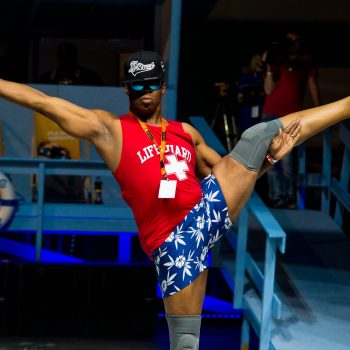 Archie Burnett, griot/guide of Check Your Body at the Door, grew up in Brooklyn in a strict Seventh Day Adventist family where dancing was forbidden. He started dancing “on the sly” when he was three-years old in front of the TV.

A self-taught freestyler who didn’t go to a NYC club until 1979 (“I was almost twenty!”), he invited Sally Sommer to DJ David Mancuso’s Loft in 1982, which inspired the idea for Check Your Body at the Door. As a master of whacking, vogueing, hustle and many other styles, the 6’4” tall Burnett has clarity and geometric body-lines. Burnett works for NYC Transit Authority, is an avid weightlifter, graphic artist, and splits his time between work, family, clubs and teaching House dance at NYC’s Peridance. He spends a good deal of the year teaching and worldwide in such places as Germany, Austria, Poland, Belgium, France, Finland, Sweden, Denmark, Russia, Netherlands, Czech Republic, Italy, Japan, Brazil. He has also given lecture/demonstrations, and has been on scholarly panels Yale, Duke University, Harvard, New York University and Florida State University.

He has appeared in several music videos and independent films, and besides dancing at the clubs, he also performs for concert-dance choreographers Doug Elkins, David Neumann, Cori Colinghouse, or, he has shown his own work at Dance Theater Workshop, PS122, DanceSpace, DixonPlace, 92nd Street Y and Lincoln Center for the Performing Arts and Théâtre Suresnes JeanVilar in Paris.